Competitive Strategy As a Framework for Making Trade-off Decisions to Get From Now to the Future: A Discussion and Disguised Company Example

Competitive strategy is the framework for making trade-off decisions to get from now to the future. The operative word is framework. 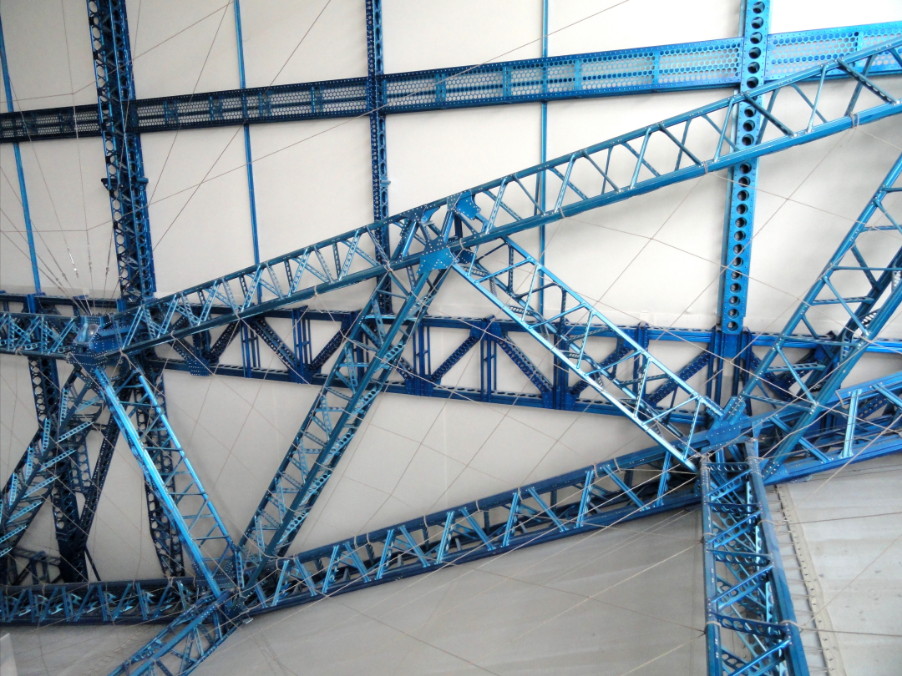 This hopefully simple and straightforward article will present my experience around viewing competitive strategy as such a framework. It will discuss what are trade-offs, what is “strategic” and how these played out from a client engagement in the 1998-2001 timeframe as an example. The firm’s name is not used but the information is left intact from that time period. This article does not violate my confidentiality agreement and could not harm the firm since twenty years have passed, but the firm is alive and well in 2019.

As an aside, as I think about this article, the experienced strategy professional will notice this article is just another way to present some of the key aspects of competitive strategy and strategic management. However, since it is highlighted by a real company example, I hope it will add value for you.

Trade-off – a balance achieved between or among two or more incompatible features. For business, this means only one thing can be chosen from two or more desirable things leading to expected desirable outcomes.

Strategic – a decision or initiative that is expected to directly affect the market value of the firm. Therefore, these are big or impactful decisions and projects. Examples are a new product or service, an acquisition or divestiture, a quality initiative, a risk reduction initiative, etc.

Thus, in this article, we will focus on strategic decisions that must have a trade-off involved. Indeed Dr. Michael Porter, the world-famous strategy professor, states that unless a decision has a trade-off involved, that decision cannot be strategic. It can be important in the tactical or operations sense, but not strategic.

Twenty years ago I discovered this aspect of competitive strategy while working for a firm that was a leader in the silicon carbide space that made the patented chemistry that led to crystals used in stop lights, lighted push buttons in planes, tanks, and myriad other applications. The firm was using extreme foresight as its thirty critical patents would not end for another ten to fifteen years from 1999 – so to about 2009 to 2014. But it knew the development cycle times for new products could be a lot longer than before. It wanted to lay the strategic foundation for making ‘the’ critical decisions in 1999 before they were forced to make them.

At the start of this engagement, I had used my previously developed Top Management Strategic Questionnaire (TMSQ) to collect opinions around classic strategy questions (SWOT, trends, etc.). In pouring over the draft Feedback Report I noticed there were extreme differences in some of the views about the same topic. There were enough differences to alarm me. I decided to portray these differences in the following chart (this is the exact slide from 1999 in my fractured PowerPoint except the name of their HQ city is omitted and I changed the font from Times New Roman to Calibri!):

Figure 1: Warm Up: Possible Inconsistencies in the Feedback Report 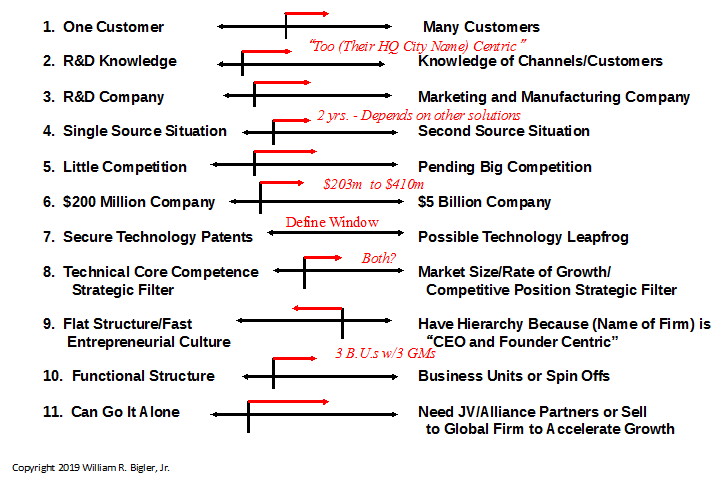 These eleven dimensions represented the key trade-off decisions that had to be made soon. The two poles of each of the eleven dimensions represented a large enough group of executives and managers that felt one way and another group that felt the other way to be an issue. In total sixteen executives, board members and managers participated. The vertical black line represented the critical mass of opinion in 1999 and the red arrow indicated the consensus direction the total group felt the company should go. But the differences were among some of the most powerful and influential people in the firm. These issues had to be taken directly on and in the upcoming Strategy Summit meeting for which we were preparing.

So from stumbling on this notion of strategy as a framework for making trade-off decisions, I noticed using the TMSQ in subsequent client engagements that all of those firms had some elements of tension among the decision-making group. I started referring to these as the “Tensional Vectors” in the business and the phrase stuck. In my experience, from that point on from 1999 every mid-sized for-profit firm or business unit of a corporation had from seven to thirteen “tensional vectors” operating at a given point in time. Before 1999 using the same TMSQ survey I did not notice nearly as much tension in those diagnostic surveys for those firms. This could have just been the particular firms and their industries, but I think it was due to the fact that by 1999 the world had become more complex with much faster change. Recall the Internet was allowed to the public in 1993. In fact, moving forward from 1999 I noticed in those clients where I was allowed to become ad hoc head of strategy development that in three years time there were some new to a completely new set of Tensional Vectors in each business. These phased out over a rolling three years but by the end of any third-year several completely new Tensional Vectors had emerged or a completely new set had done so. Not surprising to the strategy professional reading this, correct?

The next question then is where do new Tensional Vectors come from? Recall these vectors need to demand a true trade-off within a true strategic decision. Figure 2 represents where Tensional Vectors have come from most in my experience and is not intended to be exhaustive:

Figure 2: Where Do New Tensional Vectors Come From? 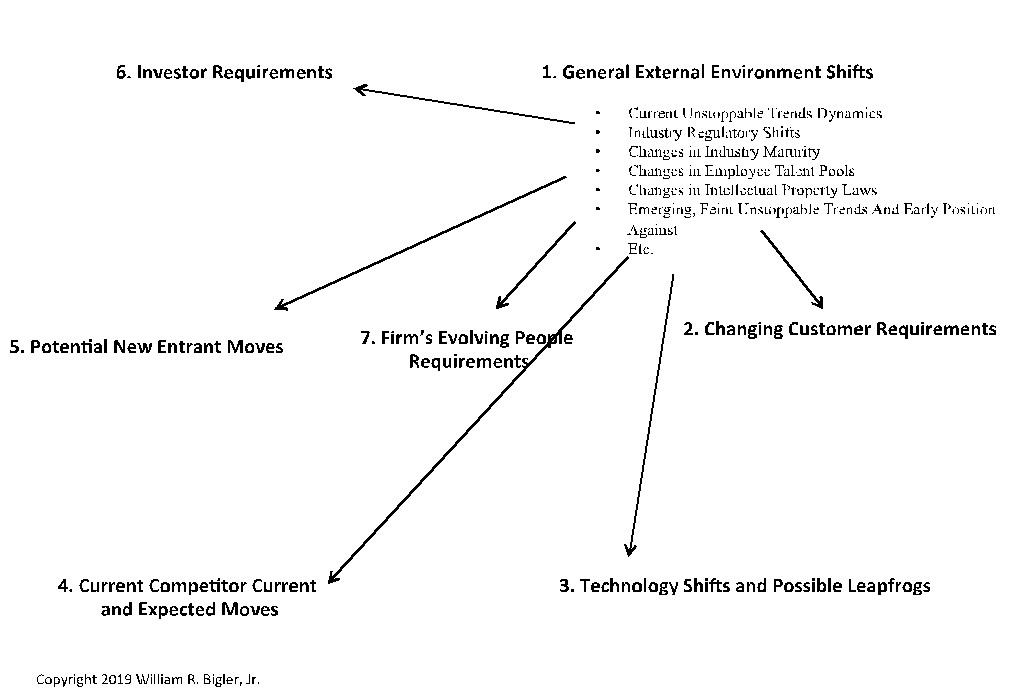 The reader can add to or subtract from this list based on their experience, but notice I have found that shifts in the General External Environment have caused most of the changes in the other six elements of Figure 2.

So how can a firm develop a framework to handle “strategy as a framework to make trade-off decisions to get from now to the future?” Figure 3 is a sketch of what I have done with clients which seems to work:

Figure 3: Framework for Making Tradeoff Decisions to Get From Now to the Future 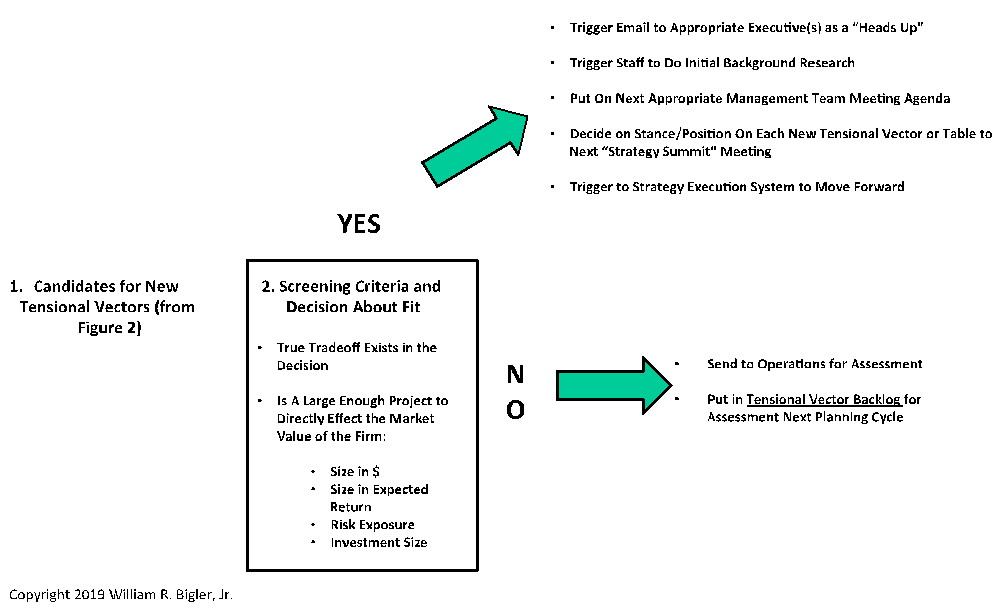 Note rarely are the two poles of a Tensional Vector, as in Figure 1, suggested until the strategy group can get together as a team. Here discussion assesses if polar differences are present. If they are the two poles are labeled and automatic polling software can be used to quickly get a consensus on who thinks what. Polling software can then be used to get a sense if there is any consensus on the desired trajectory of one pole to the other.

This simple approach is just a reminder to take the time to think seriously about the critical trade-offs that are and will operate in your business. What would you add or subtract from this discussion?

← Time, Speed and the Process Revolution: Why Are These Disciplines Disappearing?
A Crow’s Nest View Model for Growing the Valuation of Firms and an Approach for Sharing That Value With Your People →