We’ve seen recent renewed interest in how to think strategically. The offerings are good for the most part in my view. I think a focus on how ‘winning wealth creators’ think about and assess new opportunities before their investment could serve as a useful addition to any strategic plan. 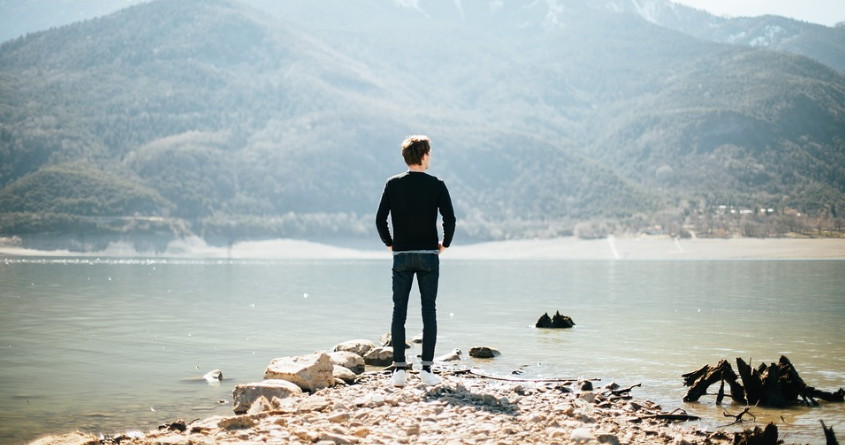 I decided to reminisce about how the winning wealth creators I’ve known and worked with over the last thirty-plus years audit each potential business idea. Even though my example below will come from the ‘major new venture’ world, we will emphasize in this article: those wealth-creating CEOs in established firms, not in the new major venture startups. While the two worlds have many similarities, there are some big differences that set creating and growing wealth via new opportunities in the established firm apart from that found in new ventures. The main distinguishing feature for established firms is that they can co-create new products and services within a base of loyal customers. On the downside, maturing established firms face barriers to advancement in areas that the ‘major new venture’ tends to avoid.

Qualifying criteria to include in-network candidates as part of my case study:

Figure 1 is the meat of this article. It depicts the major elements I have gleaned that are required to size up a new opportunity quickly. The reader can supplement with other items from their experience. And just to connect some dots, I almost always do a Business Model Canvas after this kind of assessment for the most exciting ideas and if warranted do a more detailed business or strategic plan after that. 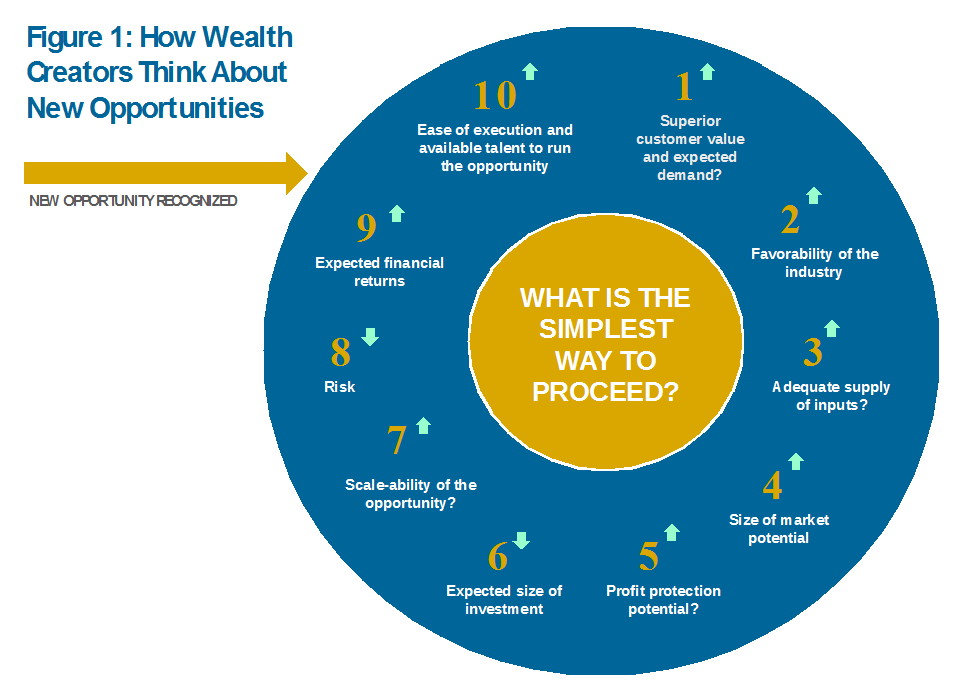 The ten elements listed are pretty self-explanatory for the seasoned strategy professional. I will discuss them and supply some brief examples from my experience. The figure starts off with a New Opportunity that has been Recognized. How to recognize new opportunities was the subject of an article I published about two years ago here.

The order of the black arrows indicates the path through an initial pass in thinking. But I must emphasize this is very iterative, not linear as the figure portrays. Any change in thinking in one element can trigger different thinking in one or all of the other elements. And the winning wealth creator can do an iteration in minutes. The green arrows next to each number above indicate which direction that element must go for contribution to an overall favorable assessment of a new opportunity. 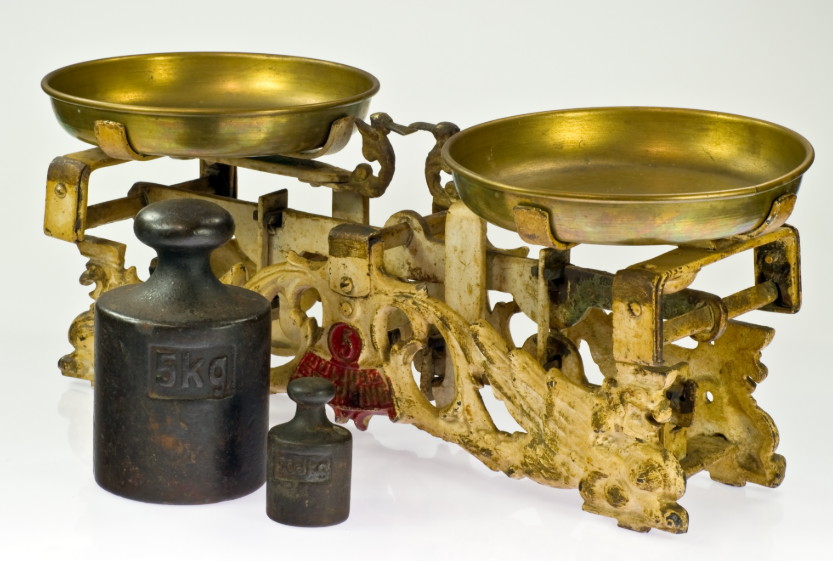 Mike Waterman, the single best wealth creator I personally have known, saw an opportunity to disrupt the cut-flower retail business. At that time in the early 1990s, there were 17,000 mom and pop retail flower shops in the U.S. I was hired to be the chief strategic analyst after the first one was let go. Mike saw the opportunity to be vertically integrated back through the supply-chain short of actually growing the flowers. The flowers were sourced from Hawaii, the Netherlands, and South America. Fed Ex, whose founder was an investor, made special containers to add four days to the shelf life of the exotic and cool looking flowers. The opportunity was called Flower Country USA and it would be a bold venture to rapidly scale with its own retail stores throughout the U.S. Flowers were flown into a distribution center in each of the metro areas. There a lead designer would design high- end arrangements and train teams at each distribution center to assemble the arrangements. These were then trucked to the stores at 5 am every morning in special vans that were painted with the FCUSA logo and flower pictures. This was advertising on wheels. The plan called for the one distribution center and twelve stores per metro area. The stores were half the square footage of the usual mom and pop store as the stores were selling spaces where no flower assembly would happen. Thus, one to two people could staff each store at peak times. The stores were outfitted with striking fixtures, lighting and music. By the end of the national rollout, FCUSA would be in every metro area in the U.S.

Assessing our example opportunity against the ten elements of Figure 1:

New Opportunity Recognized – Mike Waterman was a genius at consolidating previously fragmented competitive spaces. Mike took six months off after selling his prior venture to Singer Corporation and then traveled around the U.S. looking for his next opportunity.

As we all know, rarely is a new opportunity perfect from a due diligence standpoint, but in the case of FCUSA, the positives far outweighed the negatives. This opportunity analysis occurred prior to the Business Model Canvas, so a detailed Business Plan was prepared after this green light to serve a fundraising and operating purpose.

Finally, from Figure 1, the winning wealth creator will almost always choose the Simplest Way to Proceed if several options are available. Let me provide a quick example, this too coming from the new venture world. In the late 1980s to early 1990s, I was the chief strategist of a major new venture opportunity headquartered in San Juan, Puerto Rico. The venture was aimed at the global youth market given their needs to emulate significant personalities. At Stage 3 of the venture’s development, we would have in-house designers design apparel and sundry items for our actors/actresses and musicians under contract who would then wear on stage or in movies/televisions shows. We would have the manufacturing capability to make and ship these items directly to youth customers or their parents. We had invited the cashed-out CEO of a major sports shirt brand to be on our resource team. After listening to what he thought was a too complex initial approach, he said “We don’t you just consign space at Sears and sell T-shirts”. Needless to say we were all deflated, but his recommendation made a lot of sense. 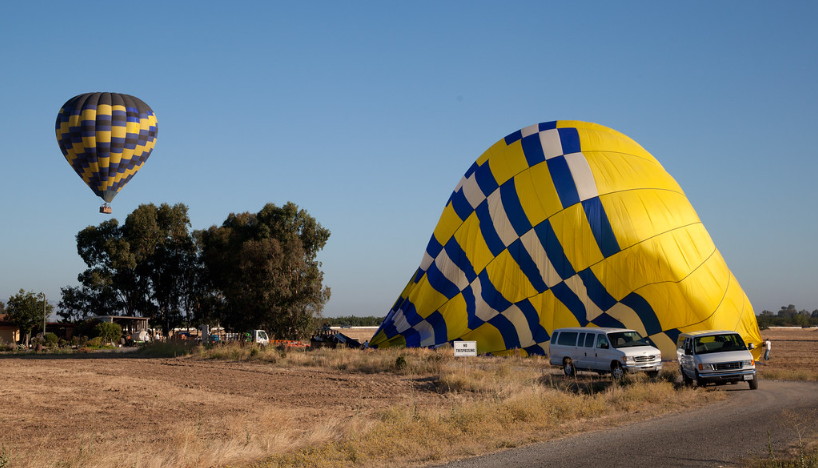 I always have five blank copies of Figure 1 in my briefcase to doodle new ideas. If you are new to thinking about new opportunities, carry a few blank ones around. When you sense a new business opportunity, spend twenty minutes gathering your insights using it. You will fuel your own increases in skill and efficiency when weighing major new venture ideas.